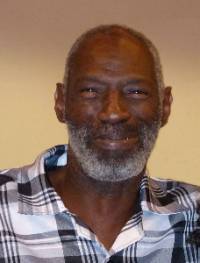 “I have to remind myself some birds aren't meant to be caged. Their feathers are just too bright. when they fly away, part of you knows it was a sin to lock them up.”

“when they fly away, part of me knows it was a sin to lock away. But still, place I live in is much more drab and empty that they're gone. I just miss my friend.”

Rev. Sherman L. Waller entered this world on November 24, 1954, the first half of a set of twins to John H. Waller and Edna M. Waller in Memphis, TN, both deceased. He had four brothers, H. Sylvester Waller, John McCarter, deceased, Melvin Waller and James Waller, and two sisters, Vera Gladney and Sheron Durr. The Waller children lost their mother at a fairly young age, but the aunts and uncles stepped up and aided their father in raising them. Sherman married Tina Marie Nichols in 1990 later divorced, but after 19 years of repair and preparation they remarried in 2012.

They had one son which they raised together Anthony Nichols. Although not his by birth, Sherman was his father in every sense of the word since Anthony was 7 years of age. He was a strong presence in his nieces and nephews lives, ensuring they were spoiled along with his two youngest brothers-in-law. He counted himself blessed to be here to help spoil his grandchildren. Sherman was educated in the Memphis school system prior to entering the United States Army.

He served just short of nine years and was Honorable discharged twice. He took great pride in his service and knowing the Military Regulations. He started his college education in Tennessee, but was enrolled in Western Baptist Bible College-Junction City Campus at the time of his death. He loved learning and could always be found with a book or his tablet reading something. He believed in “Study to show thyself approved a workman rightly dividing the word of truth.”

Rev. Waller was baptized as a child in Mt. Philsner Baptist Church in Memphis TN. He later joined Fifth and Adams Pentecostal Church of Junction City, where he accepted his call to the ministry. After a number of years he left the area. In recent year years he returned to this area where he united with Second Missionary Baptist Church joining his family. He continued in the ministry there until his “Twinkling of an eye” passing.

He preached his last public sermon on Monday April 28th and preached to his wife and a friend just minutes before collapsing. Sherman’s ministry was not limited to the church. He talked about the Love of the Father everywhere he went. It was his personal mission to regain the young adult population for the Lord.

A mighty task but he approached it full of the Spirit of God. He let love show in all that he did. Sherman was bubbling over with the Spirit. He loved the Lord and wanted everybody he came in contact with to experience the same opportunity for love and assurance for eternity.

Sherman was a fun loving person and always laughing. If he teased or picked on you, then you could be sure you had passed from acquaintance to friend in his eyes. He was a true blessing to his family. He provided loving care for his wife, doing everything he could to make her illness less painful. That care also extended to his mother-in-law, whom he called and treated as Mom. He said his one regret was that because of his own actions he missed out on so many years of his family’s life. And he learned the importance of keeping

Time between texts from song drops

Days in between Concerts

Caroline released 10-14-2022. 2 months after my birthday. Granted My name is not caroline….I take letters from my given name only letter I lack is “R” but My future X's name Randy….hmmm 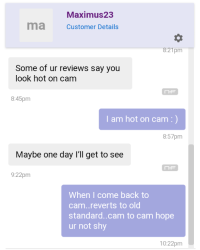 Looks like Matt Timothy..if your 2 shy drops on My mom's birthday April 23rd.

I missed filming “the consumption scene”. I have critiques for sequence in concert.

I witnessed a prepubescent boy who is finding junk for 1st time. One who is masterfully clumsy in bed having zero stamina or control over orgasm.

Well, like most fumbling idiots in bed I suppose ur no different. Thanx for proving what most males lack.

Don't passively play, motion is ri·​dic·​u·​lous I laughed for all wrong reasons.